1/19/19: Start working with Charles from Fargo on his Legacy Armour kit.  I wasn’t super familiar with this type of armour so the use of the CRL’s on the Mandalorian Mercs.  Reference photos here.

The CRL’s for this type of era don’t have too much info, but enough to get started and templates made.  Charles went for the Large size and below is how it fit on him.  We extended the sides out to where his hand is on (far right of photo below). 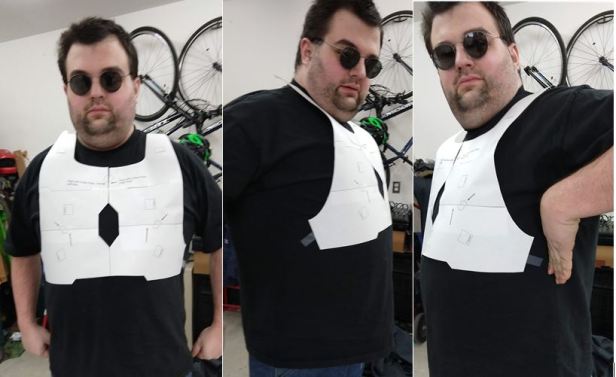 After getting the sizing correct we started cutting out the 6mm black Sintra he bought.  Word of advice a jigsaw works really well for cutting out sintra (cleaner than a grinder and faster than a dremel).

After the templates were cut out into Sintra we started heating the plates up with a heat gun to form them to his body.

Luckily I also utilized a messenger chat on Facebook with fellow Ruus’alors for some quick questions while at this armour party.  Come to find out the chest armour and collar are supposed to be two separate pieces (as seen below).  Quick adjustments we saved the chest plate, but had to redo the collar plate. 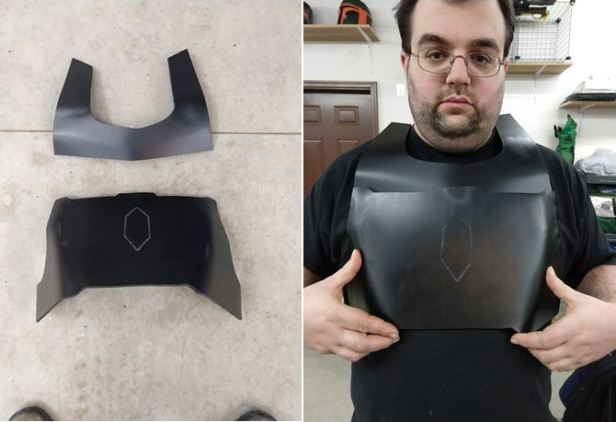 It was getting late and Charles needed to head back to Fargo from Mandan (roughly 3 hours), so we quickly formed up some of the lower pieces to his armour and shaped generally to his body.  We’ll work out the finishing touches to shaping at the next armour party.

The shoulder bells and helmet were painted previously.  Waiting to weather all armour plates and helmet with soft parts all at the same time for even weathering.

Armour plates have a gap as seen below.  Need to figure out a way to remove gap.  Asked Fitz of the Krayt Clan to help with this (expert when it comes to Legacy kits).

Also added trauma plates to the chest area, you can barely see the sharpie marks that show were the plates need to be trimmed to match the other side.  Plates are held in with longer screws for now, until Charles obtains longer Chicago screws.  Also pondering the use of another trauma plate on the plate below the chest area.