So I’ve been toying with the idea of a new holster for my DL-44 heavy blaster.  The current holster I have works great when I’m not wearing my kit.  In kit it knocks against my left knee armour because it is so long. 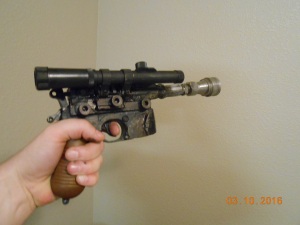 I looked up Han Solo’s holster and based my ideas off his.  I started by ordering off Amazon; belt buckles, a raw 2″ leather holster belt, chicago screws, and a 12″x24″ 10-11oz piece of leather.  Then I went to a local salvage yard and picked up some old seat belt buckles (see below).  I found a place that sold Han Solo holster hardware, but it was around $100 for just the hardware.  I picked up everything on Amazon for about $100 including the leather.  I got 14 buckles from the salvage yard for $20 and only used 2 so far.  I’m planning to make my wife a dual holster for her kit and will need 4 seat belt buckles for that.

Starting out I looked at several pictures of the DL-44 holster templates and then free-handed cut out my leather.  I used my modified DL-44 as a guide to make it fit correctly (as seen above) using Chicago Screws (3/8 in. Aluminum Screw Posts).  I had to add an extra layer of leather for these screws to be tight.

I then used a wet mold to my leather to fit my blaster and let it dry in place overnight.  Then I used a stain; Eco-Flo 2605-03 Acorn Brown found at Hobby Lobby to stain my holster.  Holding this holster in place it is high enough to not knock at my knee plates.

The next step I made was adding bolts from Ace Hardware to my belt buckles with JB Weld.  You can see the idea I had with the seat belt buckles attaching behind the belt buckle.  My buckle will attach in the front like a typical belt, instead of unlatching it on on Han Solo’s hardware.

Above is sort of how it would come together; I ended up cutting the belt a little shorter to avoid the extra material bowing out as seen in the images above.

After staining the belt I tried it on.  I noticed the other day that Han Solo wears a belt in addition to his holster rig, so I wore one for comparison.  The belt buckles have additional regular buckles JB Welded to them to loop the belt through.

The buckle on the front had some problems and now has a bolt through the front to keep the holster in place.  It works but isn’t super pretty looking.  This holster will act as a way to hold my sidearm on my Modern Kit (Karl Dha’Werda).  It is also going to be used for my custom smuggler kit for The Dark Empire (Karl Darklighter).

One thought on “DL-44 Leather Holster”