I first learned about Dresdon when my clan’s Alor’ad mentioned a guy up in Canada that made custom metal armour, helmets, gauntlets, and pretty much anything he wants to make out of metal.  I friend requested him on Facebook after joining a society on the Mandalorian Mercs forums called Aluminati.  Aluminati was setup to showcase those Mandalorian that have the majority if not all of their armour metal.  My number is #036.  If a member has full metal armour they’ll have FMM attached to their number.  Stands for Full Metal Mando in this metal armour society.

The majority of my armour falls into this society and I requested membership on April 3rd, 2016.

RESIN: Helmet (attempted to make a metal one, but scale was off and it turned out kid size, gave it to a fundraiser for a silent auction).

ABS: Gaunts and Knees (I have metal knees but they have not been attached to my kit yet, heavier). 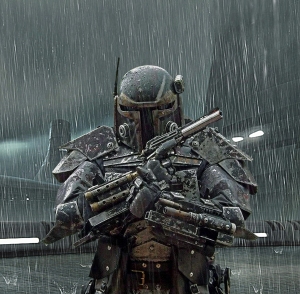 Light Modern Armour (Shoulder bells and partial back plate is 20 gauge stainless sheet metal the rest is a thicker 16 gauge sheet metal right now.  Plan to have future knees and helmet also out of 16 gauge).

SINTRA: Center diamond plate (in the works for a metal one at some point)

RESIN: Helmet (attempted to make a metal one, but scale was off and it turned out kid size, gave it to a fundraiser for a silent auction).

A few months later Dresdon posted a picture of himself at a troop where it was raining.  He asked if anyone would like to Photoshop him on Kamino.  I took on the challenge and the image can be seen above.  Dresdon still uses this image as his cover photo as of 12.10.16.  Some time passed and then I got a message from Dresdon on Facebook:

“Hey vod got a request(also, in exchange for your phenominal photoshopping skills Im offering to provide my services weather you need a couple parts made for your projects out of metal or even some LED stuff like a HUD light kit)

But I was wondering what you could figure for making this pic more ….its a nice shot but the background just doesn’t do it justice…”

I inquired to what kind of background he was looking for and this was his reply:

“Im thinking something like a partially destroyed star destroyer corridor…like Death Troopers, the star wars zombie novel. On youtube theres a cinematic trailor for it ill find you a link lets see what there is”

There was a lot of back and forth questions, ideas, and background images through out conversation.  Finally I started and came out with three images (see below) for Dresdon.

The #1 image above was a personal favourite of mine and the one Dresdon liked the most.  It is an image background from Star Wars: A New Hope screenshot from the movie.  Small details are found in the lighting on his helmet, the red LED HUDs are a more vibrant in his visor, and you can see a refection of the lights ahead in the hallway in his visor. The only thing I needed for my kit was metal gauntlets, just basic clamshells with hinges.  Dresdon said he could make them for me and had me fill out a request form in which I ended up making several upgrades that I paid addition to the free clamshells for.  I also upgraded to a better material with less weight to it and paid for shipping. 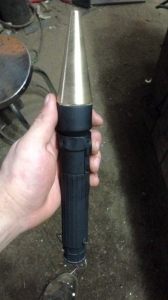 Dresdon is ingenious, he took a regular old plumb bob, a curtain rod, and some other gizmos to make this missile.  I was just in awe of what he was able to come up with.  My logic was more metal components the better.

He responded with a quote from Dee Snyder….“if it ain’t metal it’s crap”

I won’t show his work in progress (WIP) that he sent me on a regular basis due to his business secrets and work of art.  It is pretty much his copyright on the ideas if sells to fellow Vod. 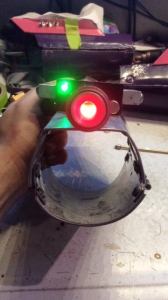 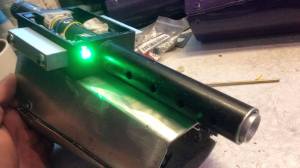 The upgrades I got in addition to the clamshells with hinges were a wrist mounted laser cannon on right gaunt and a mounted missile on the left gauntlet.  Dresdon put in a green LED targeting light (to be able to see where the laser will hit through my visor) and a high powered red LED for my wrist laser cannon.

Quote from my wife: “Now you will be a real life-size light-up action figure.” 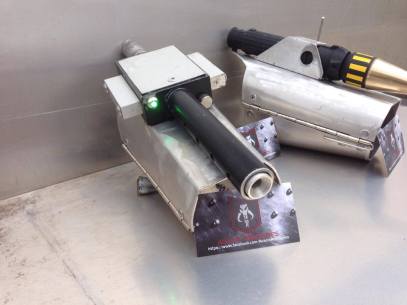 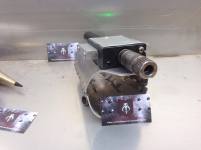 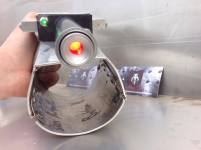 These are the photos Dresdon sent me just before he packed everything up and sent them to me.  I painted them up the day they arrived to match my current gauntlets and applied the same amount of weathering to match the rest of my kit.  I also secured the missile with a rivet gun in place (after painting). 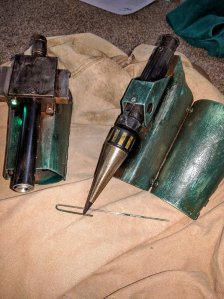 Super impressed by how these turned out and how awesome they look.  I’ll keep my old gauntlets for troops that I want something a little bit lighter for.  Overall they fit my kit well with a rock on the left gaunt and a wrist cannon on the right gauntlet. 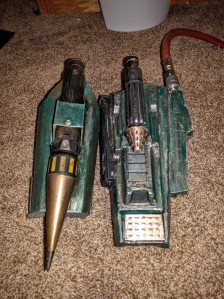 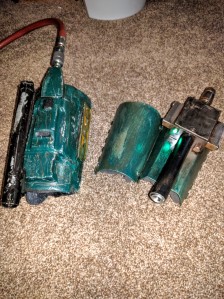 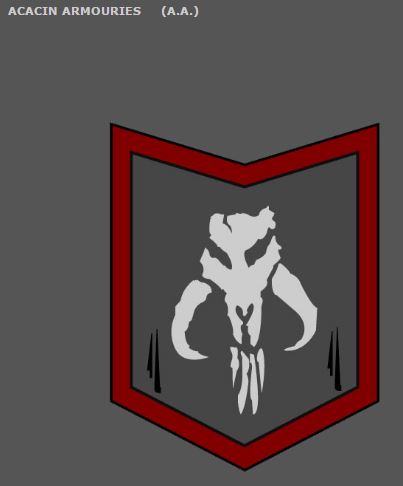