I chose a two handed rifle from Star Wars The Old Republic (SWTOR) as my Mandalorian Late Crusader weapon.   It is this Tac-HUD Heavy Sniper Rifle.  SWTOR started sometime around 3653 years Before the Battle of Yavin (BBY).  The Late Crusader time period is after the Early Crusaders (3996 BBY), but before the Neo Crusaders (which ended cir. 3060 BBY).  This places the Late Crusaders somewhere in same time period or thereabouts as SWTOR and makes this sniper rifle a logical choice for my character.

This eliminates my modified DL-44 blaster and my modified EE-3 carbine rifle from my current “Modern Era” kit of Karl Dha’Werda.  Under the CRL’s for the Beastmaster Brigade  subcategory Beast Hunter within the Mandalorian Mercs comes these BRL’s under weapons:

Although I am still working on a sintra blade for my knife, I was able to conceive this 2 handed, range weapon with scope for my beasthunter build from the SWTOR sniper rifle.  I started by researching the sniper rifle and after carefully studying them I purchased a modern “earthy” airsoft sniper rifle as seen below: 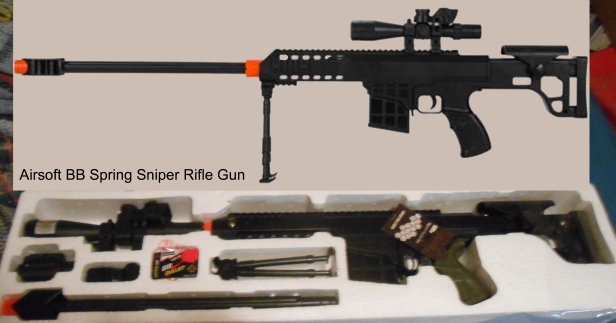 The first thing I did was had pieces of sintra (3mm) to the face of the stock and other parts of the rifle to make it more blocky looking and less “earthy.”  I added a hand grip from off of an old orange hunter pro game rifle.  You can see the slight orange left.

I then added a pipe to the desired length I wanted the barrel to be.  I spent hours at our local Lowe’s walking down the aisles looking for pipe fittings that resemble the tip of a SWTOR sniper rifle.  I don’t remember its name, but it was found in the electrical section and can have a cap screwed on the tip (to which I will paint orange) for cons and other events where it may be needed.

I added a secondary pipe above the chrome mini flashlight piece which holds the barrel in place for more stability.  Then I worked on the shape of the scope as seen in the SWTOR sniper scope (1 1/2″ PVC pipe).  I also added a iron sight to my barrel tip and a digital display from the calculator I used on my modern gauntlets (Casio calculator keypad), I figure it could be one of the blue lights on the side of the rifle as seen in the first images from SWTOR.

After going back and forth from my apartment to the garage with bits and pieces my last trip involved painting all the pieces flat black; this step made it look like a real rifle.

My colour scheme is to be similar to my late crusader beasthunter helmet with environmental in-universe colours.  Lots of greens, sort of like a camouflage with colours.  I also wanted to added leather wraps to show wear/tear and most of all use of the rifle.  It needs to look like I’ve been stalking through the woods after my prey. 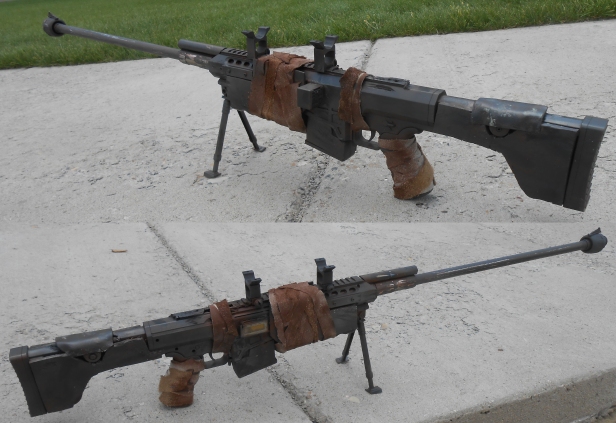 The above image shows my sniper rifle without the scope.  As I was using a real scope; a 4×32 Sniper Riflescope Hunting I got off Amazon for under $20 bucks I wanted to have the least amount of spray paint near it (to protect the lenses).

The result turned out way better than expected and I spent the following day with acrylic paints adding detail work to the overall look.  It turned out just how I wanted with my unique twists and close enough to the SWTOR sniper rifle I was going for.  Yes, I’ll probably added light displays down the road, but my primary overall look is completed (ignore the scope in the first image as it looks like it is tilted downwards.  It is a camera angle and isn’t really crooked). 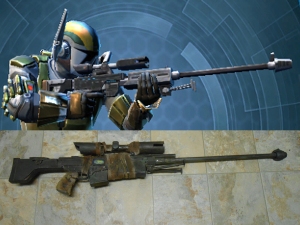 Update 11/30/2016:  Made some adjustments to my SWTOR sniper rifle.  I removed the “earthy” looking magazine, a lot of unnecessary leather wraps, and the trigger guard.