Later after a sale on May the 4th I got a Rubies 2-piece helmet with a more perfect dome.  My first priority was to get bondo on it to hide the seams and add texture like my schematics above show.  I generously used bondo to cover the entire helmet and what do you know the stuff sets a whole lot better when it is warm outside.

I then sanded/wire brushed the bondo down to the bare “metal” coat that I spray painted on (metallic black color). 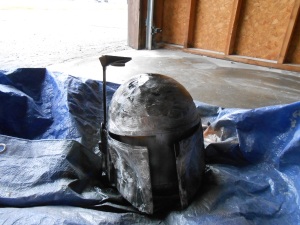 After getting the initial coat of green paint on the helmet I toyed with the idea of using a grill in front of my visor, but abandoned it when I still had to figure out how to attach the visor. 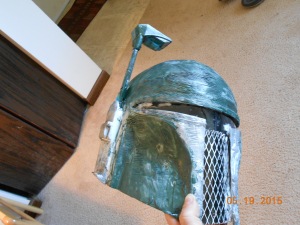 I got the color schemes on the helmet and compared it with #4 prototype.  As you can see I thought #4 was good, but as you can see #5 is way better.  I also added wear and some grime from one of my cars into the back of the helmet. 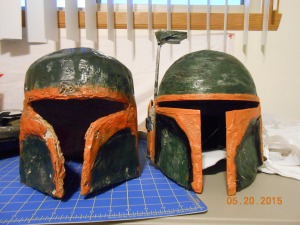 I ended up using zip ties to hold the visor in place and made sure they were colored the same as the hunter orange accents around the visor (I’ll have to figure something out to hold it in there later). 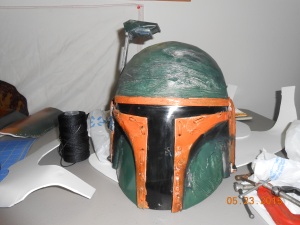 I had to repaint the bucket/helmet because the hunter orange I was using from Wal-Mart was discontinued and my new metal armour I’m working on would be in a different color.  The new hunter orange came from Lowe’s.