I thought I could use the 3″ PVC pipe to form gauntlets like this guy made in this youtube video: https://www.youtube.com/watch?v=K05IPr4SZbc  but my arms are too big and 3″ doesn’t cut it.  So I went to Lowe’s and bought some 4″ sewer drain pipe (which is about half the price of the regular schedule 40 and quite a bit thinner). 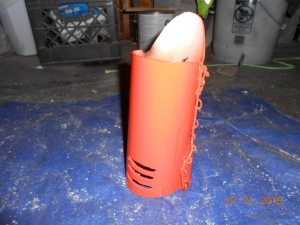 Using a similar idea from the youtube tutorial I made this gauntlets.  My funds are limited until the next paycheck, so I used what I had.  In this case I used wire to sort of sew the two pieces together.  I then painted the gauntlet hunter orange and moved on to my next piece of armour.

My next post will show a WIP for these gauntlets.