Well the second blaster based off of the last post never happen.  I decided to try and match the DL-44 base with a airsoft Mauser C96 metal base gun. 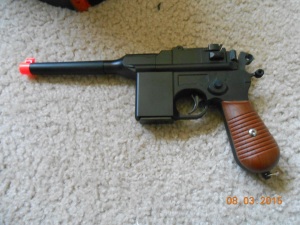 The original DL-44 seen different in each film looks like this one (see below):

I drew up some concept ideas trying to figure out what parts where used for this blaster.  I immediately saw a maglite being used as the scope.  My design however was to mount the scope on top instead of on the right side of the blaster. 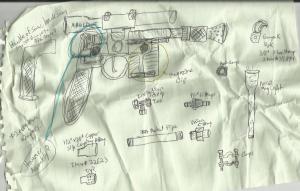 A trip over to Lowe’s to get some conduit piping, couplings, and a copper flange.  I also went to Harbor Freight and picked up a cheap “maglite” to use as my scope.

I painted it up and it looked good (except the barrel when I JB welded it has a upward curve).  The two blasters side my side, I think the new one looks a ton better.

About a month later and some new parts I redid the look of my blaster and added a hydraulic hose coupling for my barrel tip (found at an Army Surplus store in Idaho while passing though).  The air cooling vent is vertical on my model and came out of an old computer.  I also added extra support to the scope by pulling the part that held my laser on an old air soft gun. 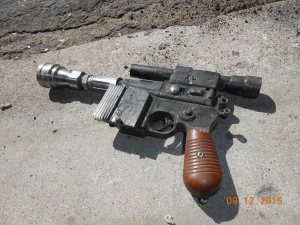 Overall the comparable look between the two is satisfying to my level of perfection enough to use as one of my weapons (more to come in the future).